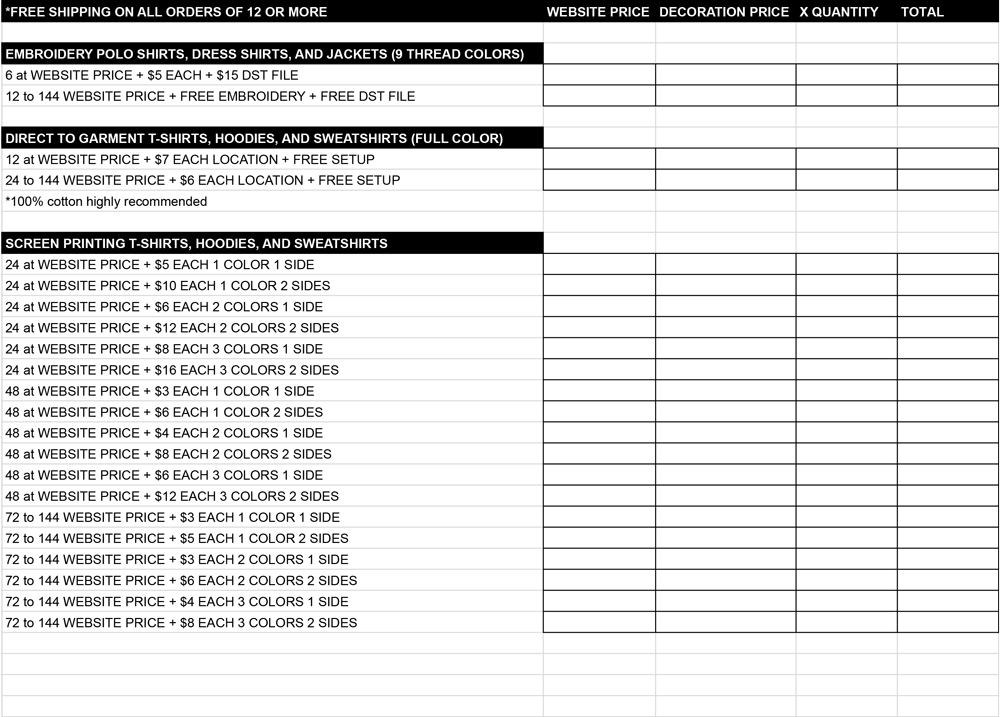 So, why should a company invest in custom merchandise? This type of stuff isn't exactly cheap and most companies don't resort to such objects just because they consider it an irrelevant expense. And, judging by the budget that most small businesses have, they're probably not too comfortable spending hundreds of dollars just for their own merch. But, there are a few really good reasons as why you should consider custom printing t-shirts, embroidery on caps and logos on bags. Some of these are just minor advantages but a few of them could be absolutely game-changing for your company. Without further ado, let's get into a these reasons and we're sure that you'll be convinced that your company requires such merchandise.

Developing a brand recognition is crucial because you need customers to trust you before they can actually purchase your product. Small businesses know the struggle of creating brand awareness and that is something that even Google and Amazon weren't able to do in the start. But, merchandise is an effective way to gain newer customers. But, an important thing to know is that just having your employees wear t-shirts and make them sip coffee out of your own mug isn't enough. Try to hand out a few t-shirts to your customers, this will probably get you in their good graces.

Other than making a simple identity, it will also make customers loyal. It's just like how Ferrari gifts you a keychain with the car because it makes the customers trust them even more. There's just something special about owning a piece that belongs specifically to a business. For instance, if Adidas gifts you a t-shirt, you'll automatically side with them in their war against Nike.

This isn't exactly a tangible benefit, but it is a great advantage nonetheless. Increasing the harmony between employees can be quite a challenging feat, and unfortunately, a vital one at the same time. But, one proven way of knitting employees close would be similar uniforms. A recent study claimed that the employees that were wearing identical uniforms tended to be way more confident in their company and their fellow colleagues. They became much more persistent to develop good relations with the people working around them and if you, the head of the company, also wears the same merchandise, it will send out a clear message that they're on the same level as you are. This might not seem important to a young entrepreneur, but if you've been running a company for a couple of years, you might just run out and design a uniform right now.

Another benefit of introducing uniforms to a workspace is that people won't be conscience of what they are wearing. People often judge co-workers based on what they are wearing. And, someone might feel embarrassed when there's one person in a $1000 suit and there's another wearing the same clothes they went to sleep in last night. Discriminating appearances is no longer a factor if you introduce your own uniform in to your work space.

Custom printed merchandise has seen a huge surge of popularity in the past few years. Every company, even conglomerates like Google and Microsoft are investing to have their own merch. That should be enough to convince you to do the same. But, let's think about it in a different way. Your competitors are making their own merch but you aren't. This doesn't just get them an edge, you suffer a lot because someone providing the same product is using such an effective protocol to advertise their company and you on the other hand, are not.

The thing about your own merchandise is that your employees will be advertising for you wherever they go. Sure, this advertisement technique isn't that effective of a way to promote your business as compared to digital marketing or putting up your name on billboards. But, it is pretty decent nonetheless.

Another thing to remember is that getting t-shirts for your employees is much cheaper than hiring professional to advertise your product. A few dollars for each t-shirt is affordable as compared to thousands of dollars on average marketing companies. That's what make merchandise great for smaller corporations working on a smaller budget.

Hopefully, when your business venture reaches a point where you're making a ton of sales, you could make a lot of extra revenue by selling your t-shirts. If your company is famous, there's a huge chance that there are already mocks of your merchandise being sold somewhere in the world. So, why not give your customers the real thing? Amazon and Ebay are good options, but you could also make your own e-commerce store. All you need to do is install an additional plugin in your website and that's it.

In the end, we'd like to introduce you Cool Idea Marketing. We are the Myrtle Beach areas largest distributor of custom apparel and merchandise for good reason. We've been working in this field for quite some time and we can say that we've gotten pretty good at it. We've served hundreds of  clients that wanted to get their name out with a few materials objects and they certainly were able to do us. So, if you're also trying to find a company that will successful understand the image of your company and print it on a piece of cloth then we are the folks that you want to call!!!

Hello, how can I help you?